A fresh breeze for The Click at the coast

The municipal administration of De Haan and Fost Plus today announced the relaunch of the Click. This festive moment also marks the rollout of the project along the entire coastline, as part of Minister Demir’s litter charter.

In 2020, at the initiative of mayor Wilfried Vandaele, De Haan was the first commune to join the Click project aimed at increasing the collection of packaging waste out of home and tackling litter in the coastal commune. The mayor believes that this approach is in line with De Haan’s aim to be the country’s cleanest seaside town. So it is only logical that based on its pioneering role, De Haan is today encouraging the other coastal communes to make the Click as well. The call has not fallen on deaf ears. The environmental service of Middelkerke has already confirmed its wide-ranging interest in introducing the Click. Bruges, too, sees value in the new approach aimed at banning litter from the “Venice of the North”.

Marleen De Soete, municipal councillor in charge of waste management and the local economy, is already enthusiastic: ‘Only together can we ban litter from the streets.’

At the time of the launch, 20 new businesses in De Haan had already committed to joining the project. They can be easily identified by means of a sticker in the window or the door. So enthusiastic “clickers” know straight away where they can exchange their Circular UCoins. The latest situation can always be found on the Facebook page: 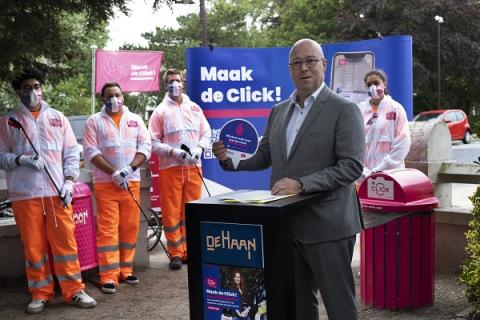